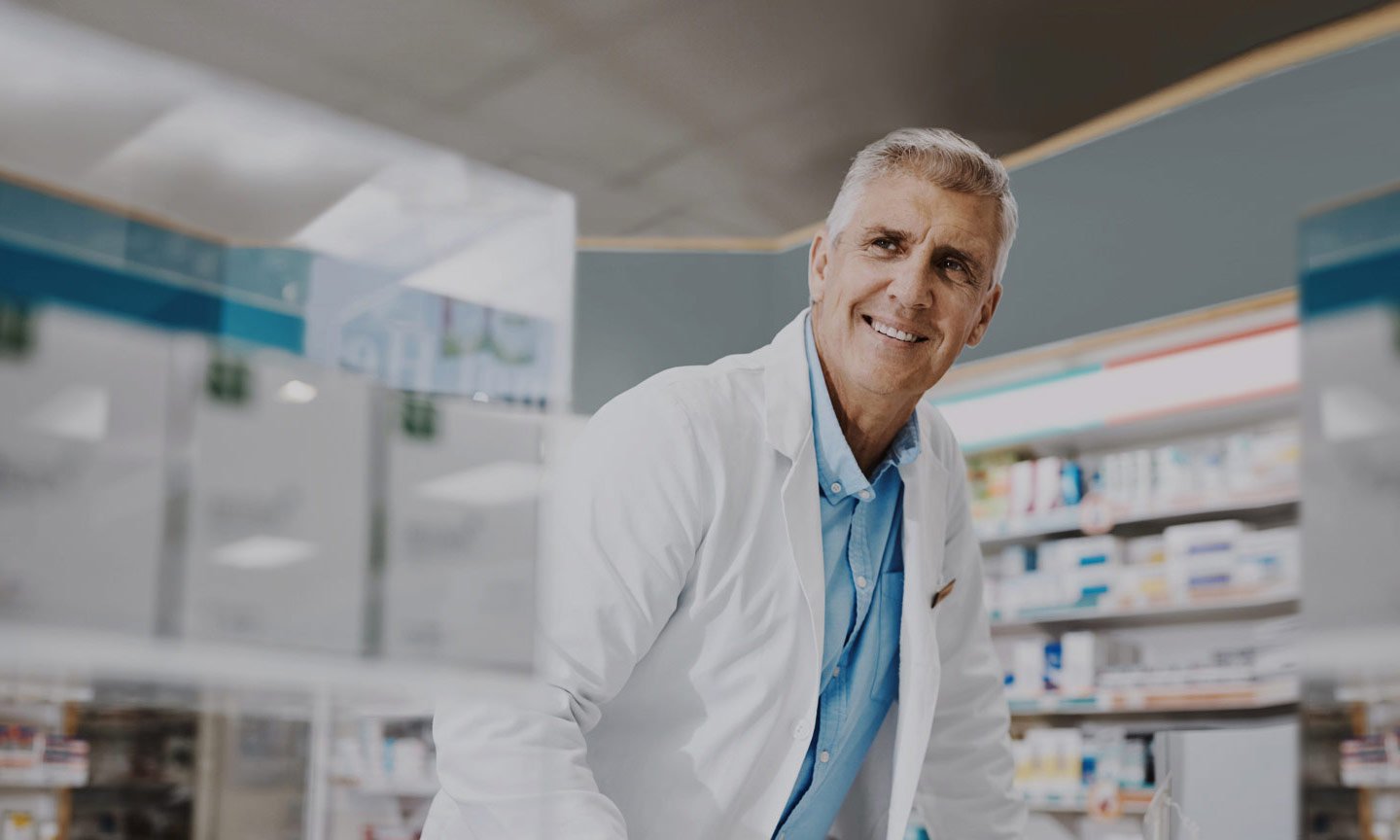 In part 5 of Webinar Rewind: 340B Basics, we pick up with Cervey’s Vice President of 340B Solutions Larry Crowder as he walks us through wholesale acquisitions costs and more.

HRSA enabled a ruling that required everyone to start on a wholesale acquisition costs (WAC) account. Initially, there were no contracts on WAC accounts. It also required those with the GPO prohibition to start on the WAC account. Now instead of just accumulating or accruing dispenses in your outpatient areas, you had to start accumulating dispenses in your inpatient areas for your GPO purchases. Essentially you start on WAC and it looks to see have you accumulated enough dispenses to buy a package on the GPO account if it's been enough inpatient dispenses, or have you accumulated enough outpatient dispenses to buy it on the 340B account.

In 2015, covered entities pushed back. There were a lot of gray areas where the covered entities were saying, "You really never answered these questions and we need some clarity about how to deal with some of these things." HRSA was going to come out with a mega-guidance, but it ended up being shelved after the presidential election. Then in 2018, there was this attempt to cut reimbursements on Medicare part B drugs. for 340B the entity, going from +6% down to -22.5.

If you think about cutting reimbursements, the whole program is based on you getting the difference of the cost you were paying at GPO versus what you're paying now at 340B. If the reimbursements start getting cut, that's taking away the whole reason for the program or the whole engine of the program, how it works and how you save money. In 2019, a district court judge ruled that this reimbursement cut was unlawful. The Medicare part B reimbursement cuts are not happening anymore.

More like this: Webinar Rewind: Don't Get WAC'd: Part 1 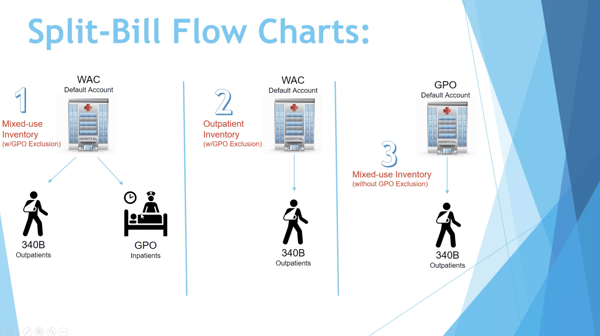 Just to reiterate the charts, these are the split-bill flowcharts for each type of account. If you have a mixed use inventory and you are a DSH or a children's hospital, this would be your model right here, model number one. You would start your order on the WAC account. And then what's happening with your software is they're looking out here at your dispenses in your inpatient and outpatient areas for each particular NDC that you're trying to purchase.

And if you have enough dispenses to buy a package, then it's going to split it off to the appropriate account. If you don't have enough dispenses, it's going to stay on the WAC account. I know some of you on the call might have a vendor where it doesn't even matter which account you started on. It looks for 340B and GPO dispenses, and then anything left over it has a default account or terminates two accounts. And that should be set as the WAC account if you're subject to the GPO prohibition.

You want to make sure that anything you don't have enough accumulation for it's staying on the WAC account. And by the way, a really popular question here is about the one WAC purchase. A lot of people are saying, "Well, if I buy it one time at WAC, shouldn't that count?" And the answer quite frankly is no. And here's the reason why. I'll give you an example. If you have a bottle of a hundred that you purchased at WAC for the first time, and you use 50 pills in the outpatient area and 50 pills in the inpatient area, next time you have to buy your second bottle you only have 50 accumulated on outpatient and 50 accumulated on inpatient. You do not have enough to buy on either account. So, that second purchase is going to go on WAC.

Another common thing that happens with WAC purchases to be aware of. If you have emergencies coming up, let's say, I know here in the south we get hurricanes, if a hurricane is coming in and your hospital wants to order up and buy a bunch of products that have an inventory to prepare for outages and not being able to get supplies, then anything you buy over what you normally buy is essentially going to go on the WAC account, because you're not going to have the usage to be able to split it off to inpatient or outpatient.

So those are things to consider with the WAC account. It's really best if you're under this model to be very consistent with the item you're buying and to maintain a pretty consistent inventory, because anytime you have a little spike in inventory, you're going to cost yourself some additional light purchases as much as possible. And by the way, all that's not possible with shortages and other things that go on but being on top of that and understanding what's causing the WAC purchases is very important in order to keep your costs down. 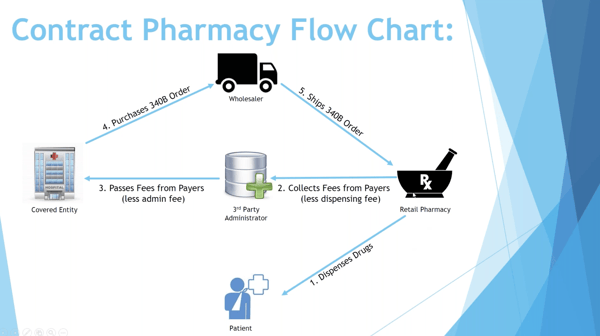 This is the second chart here. So again, this is a customer or a covered entity that has the GPO exclusion. So again, it's DSH or children's hospitals. This would be an outpatient area. Let's say that I only dispense the outpatients in this area. Then you're either going to be buying it at WAC or 340B. If it's a closed outpatient area, only your eligible 340B patients are walking into this area, you can buy everything at 340B exclusively. But if you're carving out Medicaid, or if you have the public coming in, or even if you have employees coming in, you have to account for the ineligible patients with the WAC account.

Again it's outpatient, you can't buy it at GPO. You're going to have to buy it at WAC if it's an ineligible outpatient. And then the third one here is for those last types of hospitals. That's the critical access, the rural referral center, and the sole community center. You can buy everything you want on GPO. If you wanted to buy every item on GPO and use them anywhere, you can use them in outpatient areas, inpatient areas, that doesn't matter. But to buy something on 340B, you're going to need to accumulate the usage in the outpatient areas. And then once a particular NDC reaches a full package, when you go to purchase it on your GPO account, your software should split it off to the 340B account and allow you to take advantage of the 340B pricing.

You do have to keep track of those dispenses in those outpatient areas that you can show that in an audit, and again, once you reach a full package. But I do want to reiterate because I've studied the channels indirectly, but this is an NDC to NDC program. You cannot buy furosemide 20 milligrams by one brand and then switch to another one when you go to purchase it at 340B. Whichever NDC you're accumulating, that needs to be the NDC that you're actually using and dispensing. That's the NDC that you're replenishing.

You can't switch the NDC to something else or a different manufacturer and buy that brand off usage of your previous one. So, it is an NDC to NDC program. There are different things you can do. I mean, CDM numbers, or chart code numbers, hospital numbers are used by some folks. And some folks that can get the exact NDC dispense charge on administration and so forth, that can be used as well to make sure that you're accumulating the right drug or the right NDC.

Contract Pharmacies Under 340B 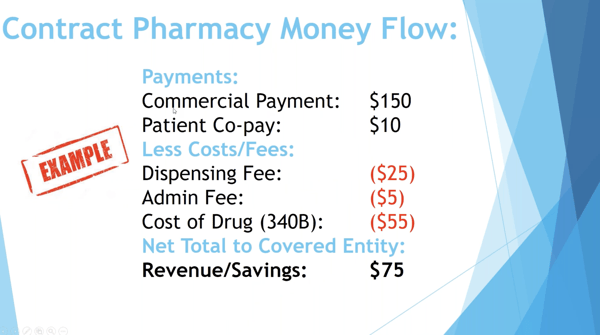 The last area I really want to go over is contract pharmacy. Contract pharmacy flowchart, this is something... For those of you who haven't been doing contract pharmacy or wondering how that works, it's a pretty simple process. Basically what's happening is your patients are leaving the hospital and they're going into a retail pharmacy. And what HRSA is allowing covered entities to do is you can hire a third-party administrator, and the third-party administrator is going to gather claim data from the retail pharmacy. Every dispense that that retail pharmacy makes, the third-party administrator will go to the switches where all the claims are adjudicated. It tells them what their copays are and how much insurance is going to pay. They grab all that information from the switch and they compare it to information they're grabbing from the covered entity.

HRSA is wanting to expand the audit and they want to get to everyone. It's not necessarily going to raise your risk of audit. I will say that if you get a hundred contract pharmacies, or if you get more than 20 contract pharmacies, your risk of audit will rise up. But if you're going to do a program where you're only contracting with a few pharmacies in your area, then that is not going to raise the high-risk meter to HRSA, and you are not going to be more apt to get an audit.

I just wanted to mention that because contract pharmacy really can be a good thing, especially if you're a smaller account. You want to be a physician-based facility, obviously the more physicians you have employed, the better it is for you. If you have clinics and you have employed physicians, those are really good for contract pharmacy results. If you're a hospital where a lot of your physicians have their own practices down the street, then those tend to not be as good.

340B Resources for Professionals 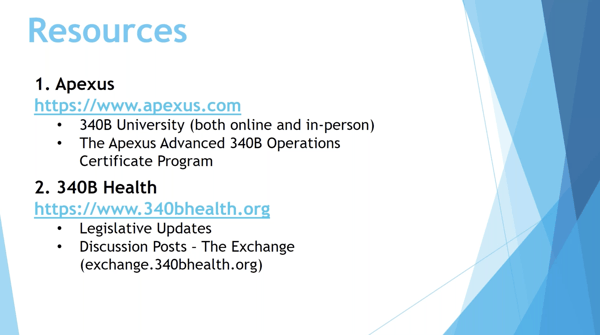 There are two places I highly recommend going if you want to learn more about 340B: Apexus’s 340B University and 340BHealth.org.

Apexus’s 340B University is great and they have an online module that's free, or you can go in person. They also offer the Apexus Advanced 340B Operations Certificate Program. If you are a 340B manager or are responsible for 340B program management, you can take this course.

340BHealth.org is a big advocate for 340B. They do a lot of the legislative lobbying on behalf of 340B covered entities. They will send out legislative updates and they will also have discussion posts. They have what they call the 340B exchange. You can go to this exchange and ask questions anonymously, or you can see what other people are asking, and you'll have different people provide answers.

That concludes the 340B Basic webinar by Cervey. Feel free to reach out to me with any questions and follow Cervey on social media for the latest 340B news and updates.

Looking for the rest of the webinar series? Check out parts 1-4 below: