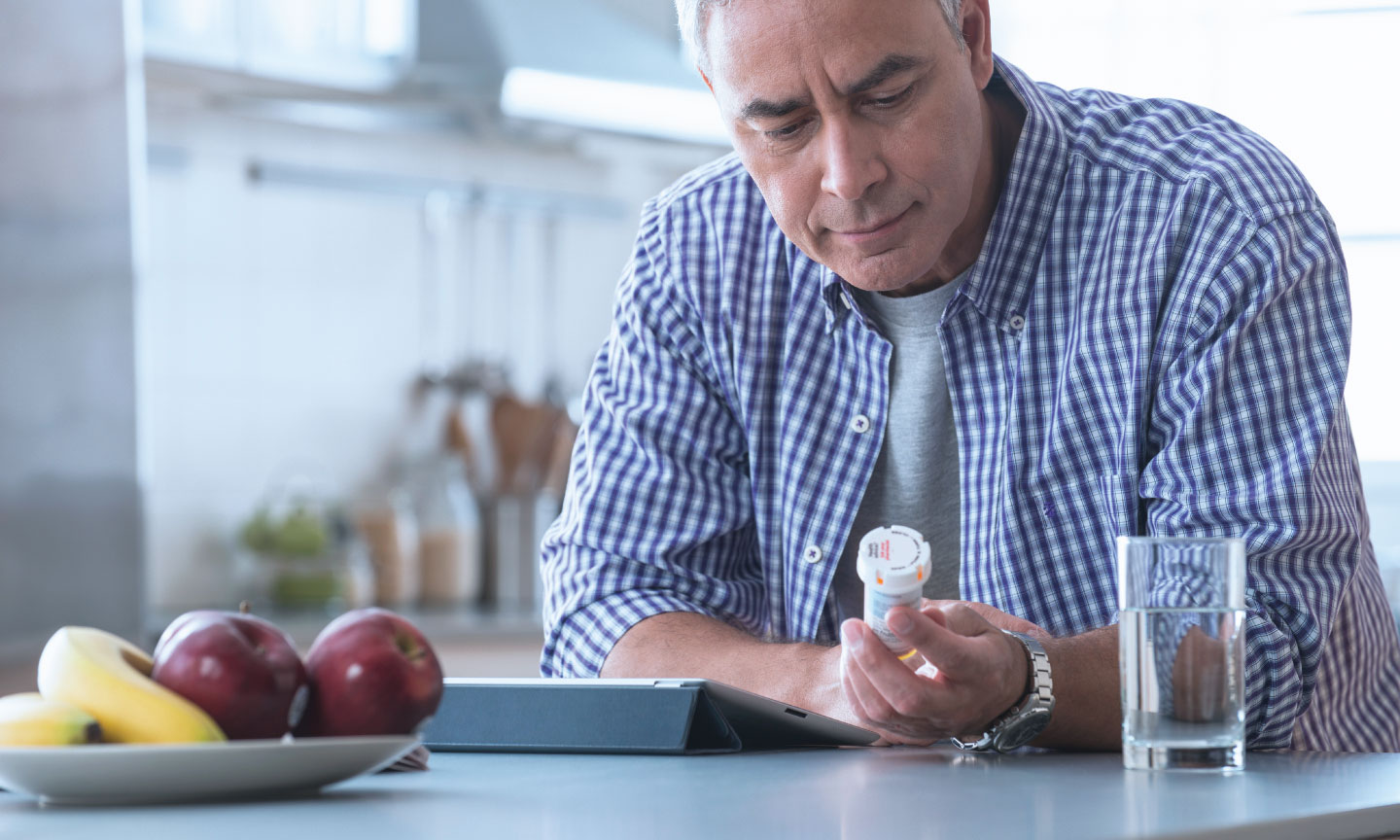 To understand the conundrum of complexities that is the 340B drug pricing program, you need to start with the basics. So that’s exactly what we did in the next Webinar Rewind series. Cervey’s Vice President of 340B Solutions Larry Crowder takes you on a journey through the basics of the 340B drug pricing program in part 1 of Webinar Rewind: 340B Basics.

Getting Started with 340B

Today, we are going to dive into the basics of 340B. This webinar is geared toward those who are new to 340B but can also be a great refresher for those who have been in the industry a while. We will discuss the program, how it started, and how it works, focusing on hospitals. 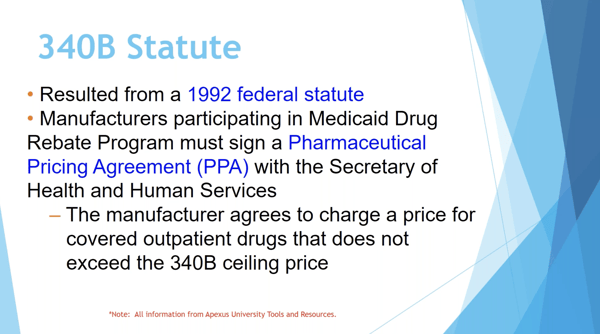 The 340B was first introduced in 1992. Under this new program, manufacturers commit to selling outpatient drugs to covered entities at reduced prices; prices that don’t exceed the 340B ceiling price.

How to Calculate the 340B Ceiling Price

The statute details how the 340B ceiling price is calculated. This is a basic formula. There are differences between brand and generic, for instance, but I'm just going to give you the very high-level basic formula. 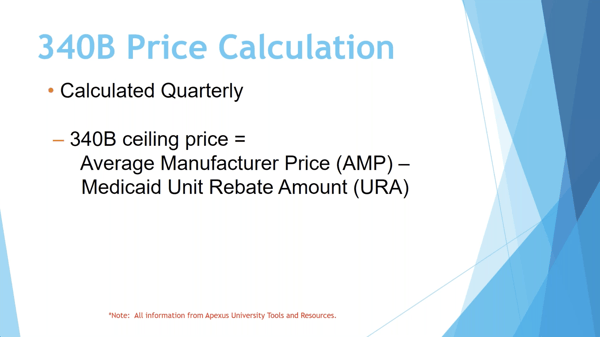 Again, it's quarterly prices. If you think about it, if you are a member of a GPO like Premier or Vizient or some other GPO, those prices change once a year, and you know how big of a deal it is when you're doing your contracts loads once a year, and the changing products and that type of thing. Now, 340B doesn't have as much on the changing products, but it does have to be reloaded every quarter with a new 340B pricing. And that can be difficult at times, especially for the wholesaler trying to reload all these things every quarter. We typically are supposed to get pricing 15 to 30 days before the quarter. That doesn't always happen. Sometimes it gets right up to the quarter or right after the quarter when the wholesaler actually gets the pricing, and it does have a two-quarter lag of accuracy.

And what I mean by lag is, if the sales transactions occur in quarter one, so in January, or the January, February, March, all of the sales transactions for a manufacturer getting the amp, they didn't calculate that in quarter two and turn that in and they submit that to CMS. They basically say, "We think this is our 340B ceiling price," and they submit it to CMS and then it becomes effective quarter three. But it's based on quarter one transactions. And something you'll see here, because of this lag, because of the lag of knowing the exact 340B price that quarter one should have been, sometimes they're billing you at quarter one at a higher price than what they should have been. 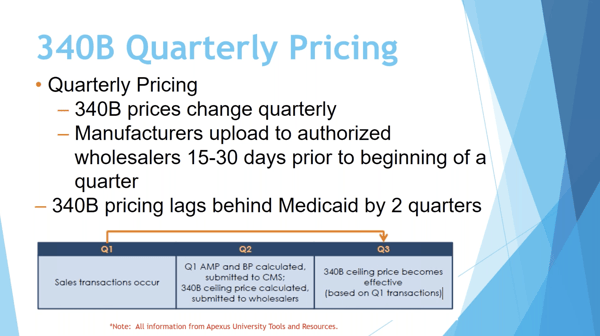 For instance, if you're paying something, let's say that you're buying an NDC and you bought 10 of them for $10 each, and after this whole process of calculating the amp occurs, the next two quarters then the manufacturer might notice, "Well, we should have been on the 340B ceiling price. It should have been $8 instead of $10 because we were off on our average manufacturer price." If that's the case, then they have to go back and credit you for the quantity of 10 that you purchased the $2 difference.

So, they have to go back and give you a credit of $20. And as a buyer or as a pharmacy employee, you might see a credit come through. And a lot of times it comes through Apexus, and Apexus will send it through your wholesaler. And you might see a credit to the wholesaler, you might actually get a check from the manufacturer. It comes in different ways, but typically it comes through a credit. When you see one of these credits, it's a 340B credit, essentially what it's saying is the average manufacturer price was incorrect in quarter one when they were actually billing you that 340B price. That calculation should have been changed based on the accurate amp, and then they have to go back and credit you that.

For those of you wondering what happens if we paid $8 for it, and then they determined that the price really should have been $10, nothing happens to the hospital in that case. In that scenario there's no further action. You just got a good deal of eight bucks to that quarter. To give you an idea, I get this sometimes with buyers who are participating in the program, there's a lot of work on the buyer's side managing what account you're going to buy on.

Most people have the replenishment software, but just managing that data and understanding why am I doing what I'm doing for 340B, I've actually heard buyers before say, "It's not even worth it. Let's not even be in the program." This is what makes it worth it. If you look at this chart, it's showing you here a hundred percent of AWP, that's average wholesale price, is a hundred percent your GPO.

If you are Vizient or if you are Premier or some other GPO, it is about 66% of the AWP price. If you look down at 340B, 340B is about 51% of the AWP price. That is much less expensive than the GPO price drug. And on top of that, you can load at no additional charge Apexus prime vendor contracts. They'll go out and they'll negotiate with manufacturers even lower prices than the 340B ceiling price. They can sell it below the ceiling price, they can't sell it above the ceiling price. But some manufacturers will actually lower their 340B price even lower with these prime vendor contracts for competitive reasons so that you choose their product.

And you'll see that the PVP price is even below the VA average. It's below 42%. That is why the program's worth it. And that's why even though there's regulation in it and there's work to be done to make sure that you're compliant, that savings is pretty significant and it can help hospitals keep their doors open and expand their services.

Follow us to stay tuned for Part 2 of the Webinar Rewind series for “340B Basics” here:

Looking for the rest of the webinar series? Check out parts 2-5 below: