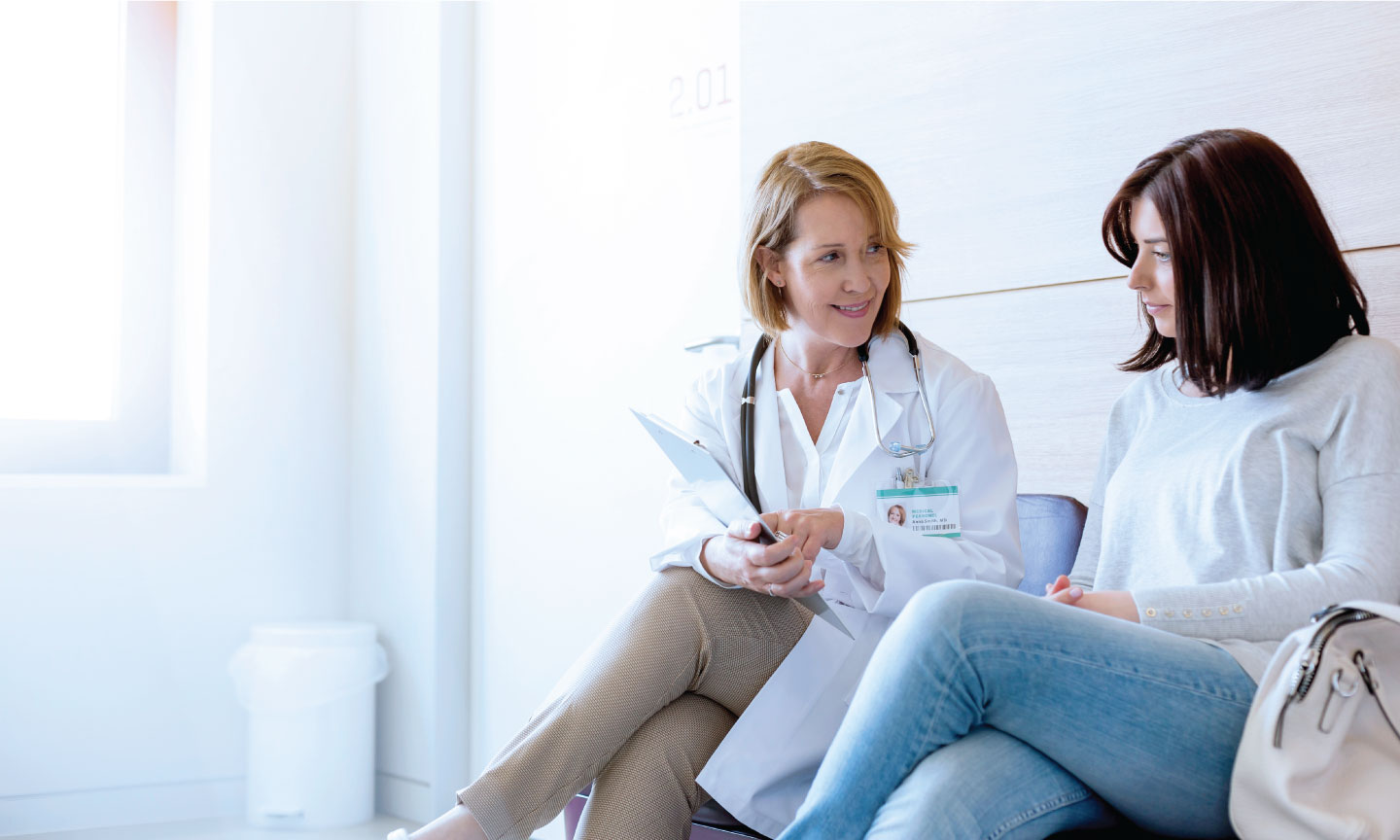 Cervey is a market leader in technology for 340B program management. This means we know the basics like the back of our hands and we want to share that knowledge with you. Cervey’s Vice President of 340B Solutions Larry Crowder helps covered entities learn everything they need to know about 340B basics. Here is part 2 of Webinar Rewind: 340B Basics.

We often get asked, “what is the 340B program's intent?” “Is the savings really making it back to the 340B patient or the indigent person who needs it most?” The program intent is to empower covered entities to stretch scarce federal resources as far as possible to reach more eligible patients and provide more comprehensive services. 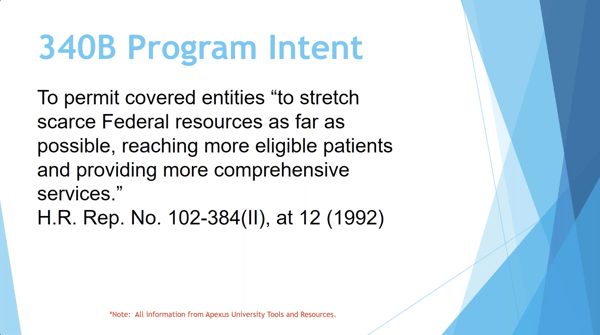 It's not necessarily meant for you to take those savings and give it to a patient who needs it. What it's really meant for is for you to keep your doors open and to expand your services to help those who you're already helping, because they can't afford the uncompensated care that you're providing. It's really about the hospital or the covered entity being able to keep their doors open and expand their services. That's how you are helping the indigent patients. The intent of the program is to help you as a covered entity cover all the costs that you're already losing every day.

So, who's eligible? Today I'm going to talk about the hospital side of it, but there are federal grantees and designees that are eligible like Ryan White Clinics and the FQHCs. But I'm assuming if you're on the call, you're probably a hospital that's either an account of ours or not, but you're probably a covered entity that's a hospital. And you really need to know what type of hospital you are. There are six different types here.

Disproportionate share hospitals, they are the most common and the 340B. And you have certain criteria. If you're a disproportionate share hospital or if you're a children's hospital, they're lumped together. They have the same criteria. And then you have these four other ones that are smaller, the critical access hospitals, the rural referral centers, the sole community hospitals, and then you even have freestanding cancer hospitals.

Hospital Types Under the 340B Program

I'm going to go over a little bit of the differences of what's required of each of these, but you really want to know what type of hospital you are. And if you don't know that, later on I'm going to show you the HRSA website and you can look your hospital up on the HRSA website. And it'll tell you by letters in front. It'll either have a DSH for DSH, a PED for children's pediatrics, CAH for critical access and so forth.

You'll be able to tell what type you are just by looking up your hospital. Eligibility requirements are different for each of these. You'll see the first three there, disproportionate share hospital, children's hospital, and the freestanding cancer center. They all have to be nonprofits. That's true for anything. For any eligible entity, you have to be nonprofit, but for those first three, you have to have a disproportionate share percentage of 11.75% or higher to be eligible to register for 340B.

This percentage can be figured out from your Medicare cost report. And that's what you use. So, when that's filed, if that percentage is higher than 11.75%... And again, all of that percentage is saying it takes into account your uncompensated care, your Medicaid and the type of reimbursements you're getting. It takes all that into account. And this percentage, it's a complicated formula that I'm not going to stick up here, but it takes all that into account, and that tells you whether or not you're eligible as a 340B entity. 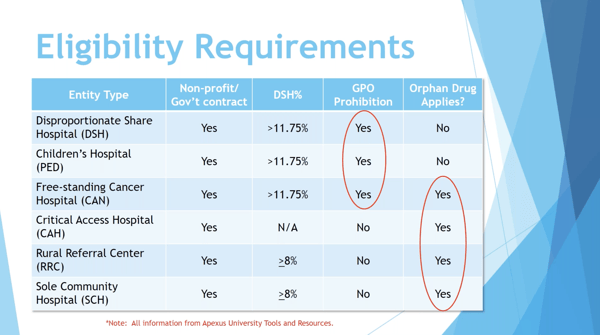 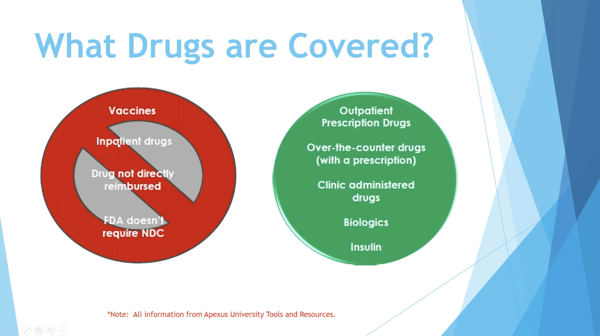 What drugs are covered under 340B? This is another important thing to know. Your outpatient prescription drugs, over the counter drugs can be covered as long as it's with a prescription, your clinic administered drugs, your biologics, and your insulin, they're all covered under 340B. That means that if you have the GPO prohibition, those drugs are subject to the GPO prohibition, and you can get the 340B pricing on those drugs.

Over here on the left, these are non-covered 340B drugs. Basically, inpatient drugs that you're dispensing in an inpatient area of your hospital, those are not covered. You cannot get a 340B price on that. Vaccines are not covered, a drug not directly reimbursed, a lot of times this is your contrast media or your anesthesia gases. If you're billing that as part of the procedure, you're not getting directly reimbursed on that NDC, then that can be considered a non-covered drug. And you can buy that at inpatient only on the GPO account all the time. And then the last is the FDA doesn't require NDC. If there's no required NDC, that drug is not covered.

I will mention here, there are some contracts that get loaded on these sometimes. And for those of you who have the GPO prohibition, you're going to have a WAC account, which is the wholesale acquisition cost. And that's the account that you must default all your purchases on. And Apexus has gone out, and for some of these drugs, they have gotten additional pricing discounts. And again, they're called prime vendor contracts. So, vaccines are one of those. Even though vaccines don't have a "340B" price, they do have a prime vendor price that you can buy at a lower cost. That's something to look for. It gets confusing sometimes with that, but vaccines are considered non-covered, but you can get a discounted price through Apexus on your WAC account.

Who Oversees the 340B Program

You have two bodies here that overlook the 340B Program. The Health Resources and Services Administration, that's HRSA, they have the Office of Pharmacy Affairs which is under them, and they oversee the 340B Program administration. They're going to handle the registration online. When you go to the HRSA website, that's how you register as a covered entity. You have to recertify yearly and they handle that recertification process. And then they also oversee the compliance of it.

They make sure that compliance is being accomplished and they do that through audits. They've hired a group called the Buzzell Group that now goes and does the audit. If you ever get audited, that's coming from HRSA. They also establish a mechanism to prevent the duplicate discount. That has to do with Medicaid and we're going to talk about what a duplicate discount is in one of the next slides.

Follow us to stay tuned for Part 3 of the Webinar Rewind series for “340B Basics” here: