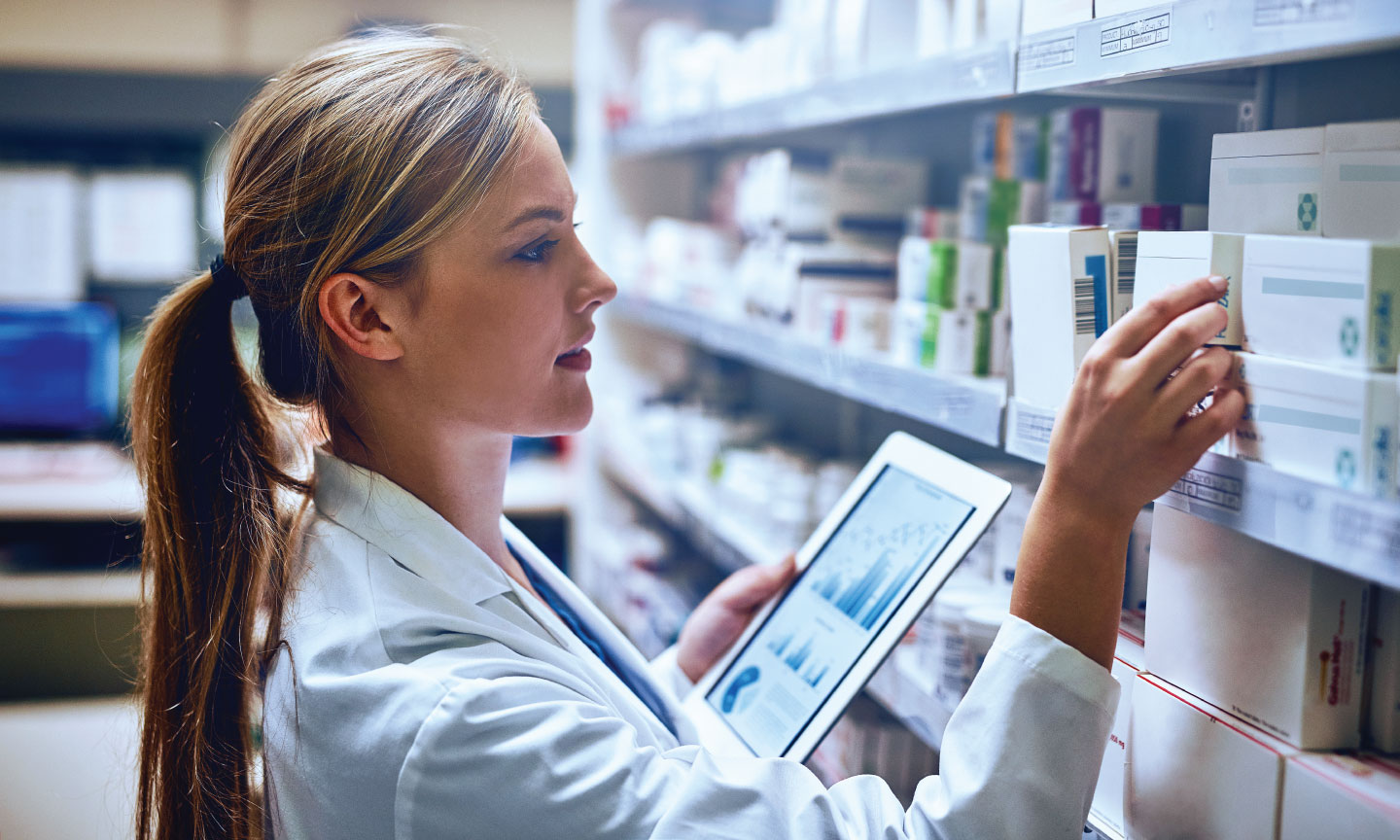 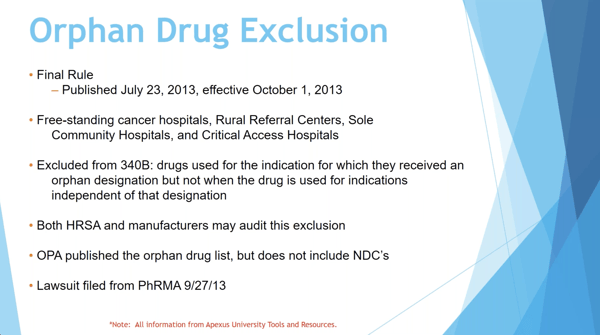 In recent years, the orphan drug exclusion has actually gotten a lot simpler. The orphan drug exclusion applies to critical access, rural referral centers, and sole community hospitals and the products they use for rare diseases or conditions. Manufacturers requested that orphan drugs not be included in the 340B Program because these are high research drugs; there's a lot of costs involved in bringing them to market. And of course, by the very definition of rare diseases or conditions, not many people are using them.

Initially HRSA came out with a stance on this saying if you're using this for non-designated use, then you can apply the 340B price and get the 340B price for this NDC, because you're not using it for the designated orphan status use. Manufacturers didn't like that. They took it to court, and they won. Essentially what the court said is HRSA was writing additional laws and they don't have the power to do that. They can only interpret the current law that Congress has approved. In the current law that Congress has approved, they basically say orphan drugs are ineligible for 340B if you are one of those covered entity types.

So now what's happened is you've had about half of the manufacturers say, "You know what? We understand that you're not supposed to get a 340B price for orphan drugs, but we're going to go ahead and offer a 340B like price." They just can't call it that because the ruling basically says you can't load 340B pricing for orphan drugs.

If the other half of the manufacturers that have orphan drugs decided not to extend that price, then you're going to see that at a WAC price in your 340B account. You're not going to have a 340B contract on those, essentially, it's taken care of by your wholesaler. Your wholesaler is either going to load or not load a price on those items. And if they load one, it's going to be considered a 340B like price, and they'll probably call it something other than a 340B contract. And if they don't load one, then you'll know there's just no 340B price on that. And since you don't have the GPO prohibition, you can always buy it on GPO. But as you know, a lot of these drugs that are orphan drugs don't have a contract on GPO either. You're essentially paying the same price for it that you would have.

340B Timeline of Events 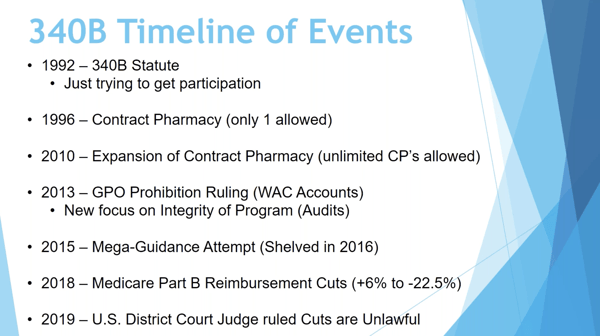 When 340B was introduced in 1992, it was just trying to get participation. There were very few hospitals that were participating. In 1996, they allowed covered entities that have a contract pharmacy (that's where they can have a partnership with a local retail pharmacy, or it could be their own retail pharmacy). But they could only have one and essentially, they could capture more savings through their patients going through that pharmacy.

So, what happened with this is it perked up the manufacturers. They saw a huge expansion of the 340B Program. And if you know the background of how chargebacks occur, the billing is still going to the covered entity. The manufacturers were seeing these covered entities just really expand their 340B purchasing, but they didn't necessarily know where that was going. They don't see exactly that it's being shipped to these pharmacies or which pharmacies are doing it. The contract pharmacy program really expanded 340B and the volume of what was coming through. Manufacturers took notice of it. They will all be pretty hard things.

I don't think this program is really being overseen properly. And in 2013 that led to the GPO prohibition ruling where you had WAC accounts. Before all of this, before 2013, the model of how you did 340B replenishment was essentially... Even if you had the GPO prohibition, you would start on your GPO account and you would only accumulate usage in your hospital outpatient areas.

And once any of that usage reached a package size to buy at 340B, it would split off from that GPO order and buy it at 340B. What the manufacturer's argument was and what HRSA ultimately agreed with is, since you're using GPO product to begin with, you purchase this on the GPO account, and now you've used that in the outpatient area, you have just violated the GPO prohibition. And again, this is for DSH or children's hospitals only. But they're saying you've violated the GPO prohibition because now you've purchased something at GPO and used it in an outpatient area.

More like this: Webinar Rewind: Don't Get WAC'd: Part 1

Follow us to stay tuned for Part 5 of the Webinar Rewind series for “340B Basics” here:

Looking for the rest of the webinar series? Check out parts 1-3 and 5 below: