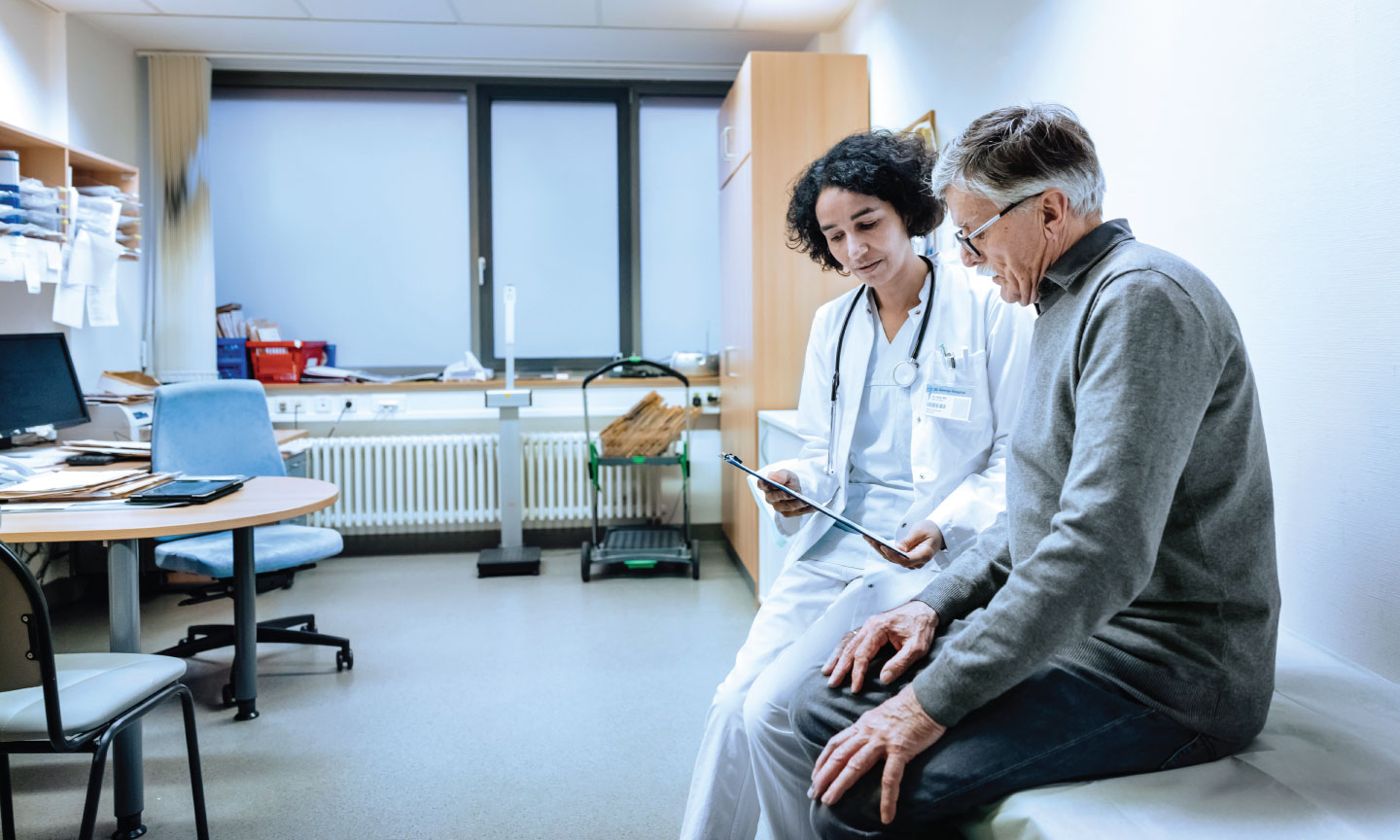 Dive into part 3 of our latest Webinar Rewind Series: 340B Basics with Cervey’s Vice President of 340B Solutions Larry Crowder helps 340B program participants learn everything they need to know about 340B basics.

Apexus, HRSA, and 340B Advocates

Apexus has a contract with HRSA and they are the source of truth when it comes to 340B. Essentially any policy question that you want to ask, you can call Apexus and they will either answer the question or point to the statute or the section that answers your question. If it's too difficult of a question or a big gray area that they need some clarification on, they will ask HRSA for some clarification.

If you're hearing even from a consultant or from another entity, that's a 340B advocate, you still want to make sure Apexus agrees with the assessment or they're on the same page with what you're doing, because they are the source of truth. They're the ones that get the information directly from HRSA, and they interpret the statute for you.

There are three major compliance areas for 340B that a hospital or a covered entity must be aware of. Number one is the duplicate discount prohibition associated with Medicaid. Number two is no diversion, meaning you want to make sure you're not buying something at 340B prices and then sending it to an ineligible area or group or another hospital. Number three is the GPO prohibition or the orphan drug exclusion.

So, what is the duplicate discount? When you register as a 340B covered entity, HRSA asks you if you are going to buy your Medicaid outpatient drugs at 340B or not. Are you going to buy those things at 340B pricing or are you going to not buy them at 340B pricing? Remember if you have the GPO prohibition and you say, "No, I'm not going to buy Medicaid at 340B pricing," then you're going to be paying the wholesale acquisition cost. You're going to be paying WAC because you're not going to be able to use the GPO pricing. But if you are buying it at 340B, then you have to put your NPI number on the HRSA website and you have to alert your state that you are buying these at 340B. And what your state will do is your state will reject the rebates they get from the manufacturer for those dispenses or for those billings.

Know Your State Requirements for Medicaid

It's important that you alert your state. This gets even more complicated because the state laws are all very different. For instance, in the state of Texas, I think it's a benefit to carve-in Medicaid because they have a certain reimbursement structure that they do for outpatient Medicaid if you are carving in. Essentially you're buying everything at 340B for your Medicaid outpatients. They have a reimbursement structure that's pretty simple I think. Other states ask you to provide the acquisition costs. And sometimes it's very difficult for hospitals to provide a second set of pricing for those claims or for those billings. Sometimes it's easier to carve out based on what state you're in.

If you're buying all your Medicaid outpatient drugs at 340B price, you want to make sure your state's aware not to receive those rebates. Because if they receive the rebates from the manufacturer, essentially the manufacturer has given you a huge discount and then they're providing a rebate, and a lot of times that puts the manufacturer upside down to where they're actually paying you to use their product, so obviously that's not going to work. You want to make sure you're doing one or the other but not both.

Carve In vs Carve Out in Medicaid 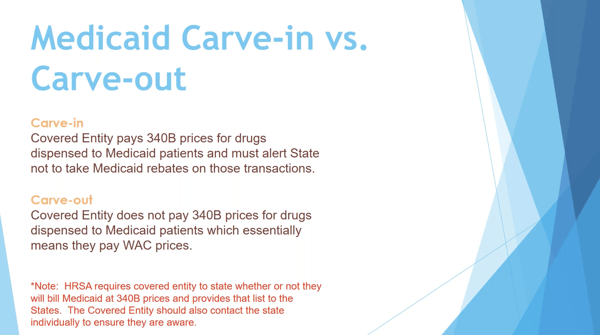 Just to get that explanation of carve-in versus carve-out, this is a term that you're going to hear quite a bit when you're talking about Medicaid. And again, carve-in is when you're paying 340B price for your Medicaid outpatients.  When you're dispensing it to your Medicaid outpatients, you're going to replenish that drug at a 340B price. If you're carving out, you're essentially saying, "I am not going to pay 340B price for my Medicaid." And therefore, the state can still collect rebates as usual.

But again, if you're carving out, remember if you are subject to the GPO prohibition, any Medicaid outpatient drug that you're buying, you're going to be buying at WAC or the wholesale acquisition cost. And we'll talk more about GPO prohibition here in a second.

340B Patient Definition and Diversion 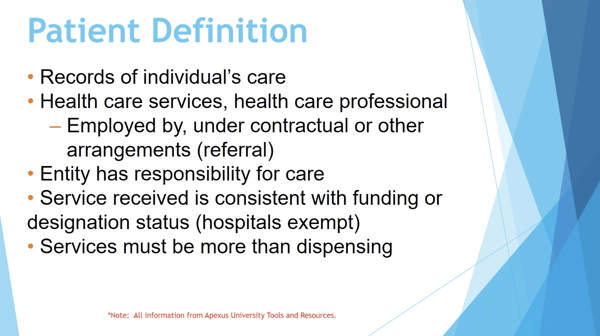 Okay. So patient definition. This has to do with diversion. You want to make sure you're not diverting any product. And again, there are some things that can get confusing around this, okay? First of all, for someone to be 340B eligible, their record of care has to be at your facility. You have to have a file, but essentially showing that they're patient with your facility.

Your healthcare professional, the one that writes the script, the prescriber, has to be either employed by under contracts or some other type of arrangement as how it's stated in the statute, which can be a gray area. And I'm not going to get into the gray area, but that typically can mean a referral. And there is some paperwork you have to keep to show that it was a referral, but you have to have one of those circumstances for that prescriber to be an eligible prescriber.

Again, the entity has to have responsibility for care. That fourth one, the service received is consistent with funding or designation status has to do with the federal grantees. And then the services have to be more than dispensing. If all you're doing is dispensing a product to a patient that comes and they did not have an encounter at your hospital, or they don't have any services at your hospital, their record of care is not at your hospital, then that is not an eligible script. So that's an important distinction. Where this can get confusing sometimes is the patient does not have to be indigent for them to be 340B eligible. The 340B Program, the savings are generated through insured patients.

Where Savings Are Generated

And I wanted to make that clear for those of you who are new to this. Insured patients are where the savings are generated. What happens is the insurance company is going to be billed the same amount as they've always been billed before 340B existed. The only difference for those eligible patients is you're going to be paying a lot less for the product. Your costs are going down. That difference between what your costs were under GPO pricing and what your costs are under 340B pricing, that's how the savings are generated on the 340B Program.

Again, it's not about the patient being indigent as the eligible 340B patient, all that matters is the patient's record of care onsite, the prescribers or prescriber of the hospital, and in some way the covered entity has responsibility for care. As long as they're outpatient and those are all true, then that patient is eligible for 340B pricing to buy the drug at 340B.

So, GPO prohibition. This is a big one. And again, this applies to disproportionate share hospitals, children's hospitals, and freestanding cancer centers. And if you read this statement at the bottom, it said these hospitals will not participate in a group purchasing organization or group purchasing arrangement for covered outpatient drugs as of the date of the listing on the OPA website. This is an important statement. Specifically, they're not talking about Vizient and Premier only, they go beyond that when they say GPO. And I'm going to give you an example. Let's say that you are a hospital and you're a part of a group of five other hospitals. You're in a region and you're a part of these five other hospitals. And you go to a manufacturer as a group of five hospitals and you ask for an individual contract from this manufacturer for this group of five hospitals. HRSA would consider that a group contract. That is a GPO contract.

If, however you had a system, let's say that you had a hospital system, and you had a parent hospital, and all the other hospitals in the system were child sites of that parent hospital, then if you're registered that way as a parent and child site relationship, you would have the same 340B ID number except for a letter at the end of it. You might have a different letter at the end of it. If that's the case, then you can go as a system and request an individual contract from a manufacturer. And that is considered an individual contract, it is not considered a GPO contract that's subject to the GPO prohibition.

As a group, you're not able to go to the manufacturer and negotiate an individual contract and use that individual contract on your WAC or 340B account. That would be also considered a GPO price. It would be a group contract. That's the nitpicky side of it. But I wanted to make everyone aware of that, that GPO is not just your Vizient or your Premiers, it's any contract that you negotiate with additional parties that are not part of your 340B ID number. Anything that's not a parent-child relationship in registration, that is considered a group contract if you go and negotiate that with the manufacturer.

Follow us to stay tuned for Part 4 of the Webinar Rewind series for “340B Basics” here:

Looking for the rest of the webinar series? Check out parts 1-2 and 4-5 below: