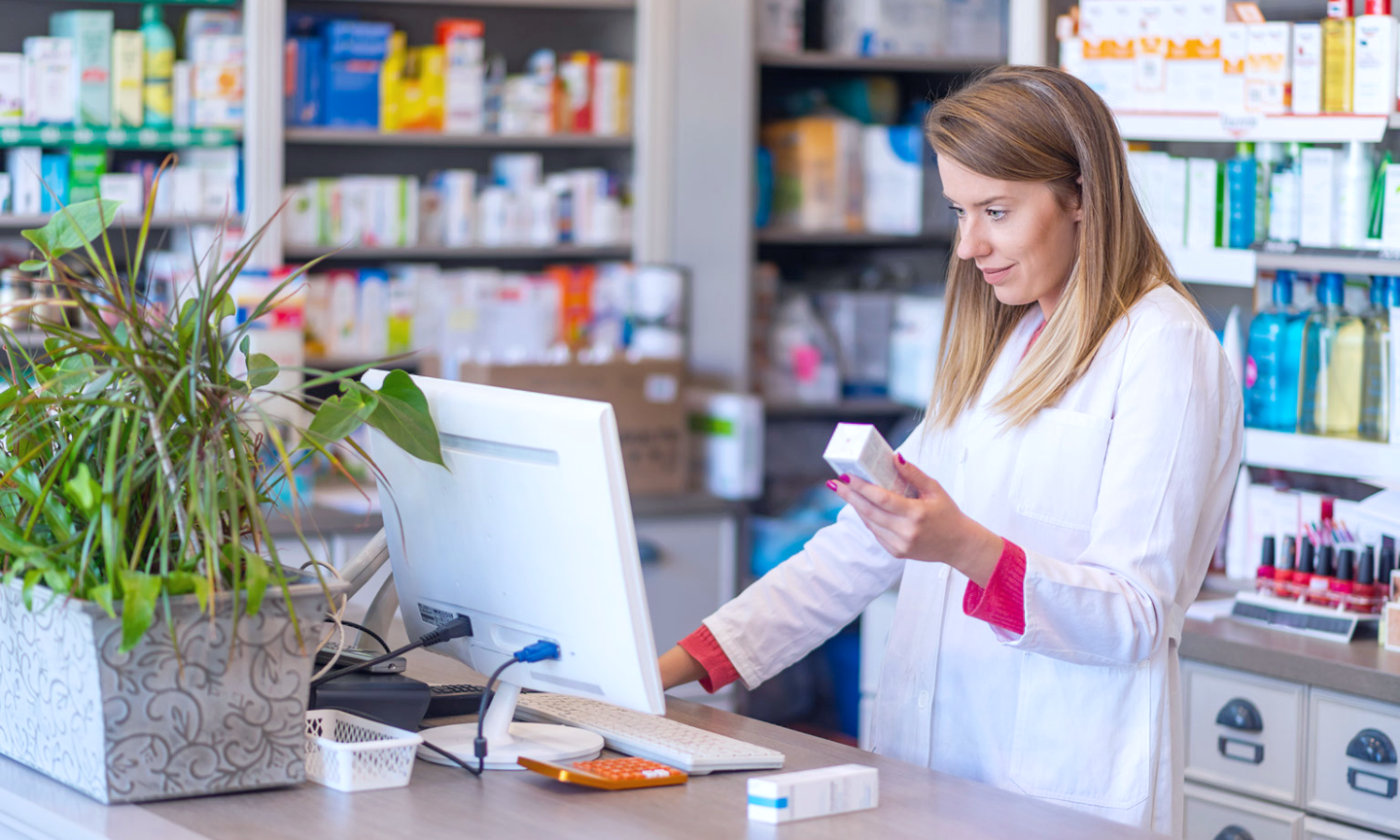 In Part 6 of the 340B Webinar Series - 5 Reports to Ensure 340B Compliance and Maximize Savings Larry Crowder, VP of Cervey and Ambre Ayoub, 340B pharmacy compliance analyst with Seattle Children's Hospital are going to cover the last of the five 340B reports, the 340B Program Self-Audit Report. These five reports are to ensure compliance, maximize savings in the 340B program.

Missed parts 1 through 5? You can find more info below:

340B Webinar Series - 5 Reports to Ensure 340B Compliance and Maximize Savings: Part 6

We will go through these five reports that are the most helpful or benefit you the most in being efficient with your program. Then Ambre is to go over how Seattle Children's Hospital implements these reports.

The 340B Program Self-Audit Report

This is the fifth report we wanted to talk about. And technically, it's not a report, but it is. It's the 340B Program Self-Audit Report. And what we've seen a lot of covered entities will do is they'll pick a random claim or have some process of selecting a claim that they want to review and make sure that it was an eligible 340B claim.

They'll go back to their EMR system, saying, was it an outpatient? Yes, it was; it was eligible. It was an outpatient status. But in reality, HRSA doesn't just look and see; is it an eligible outpatient? They ask several questions when it comes to self-audits. So what we thought would be good to mention is the things that HRSA looks at in every claim that they review during an HRSA audit. 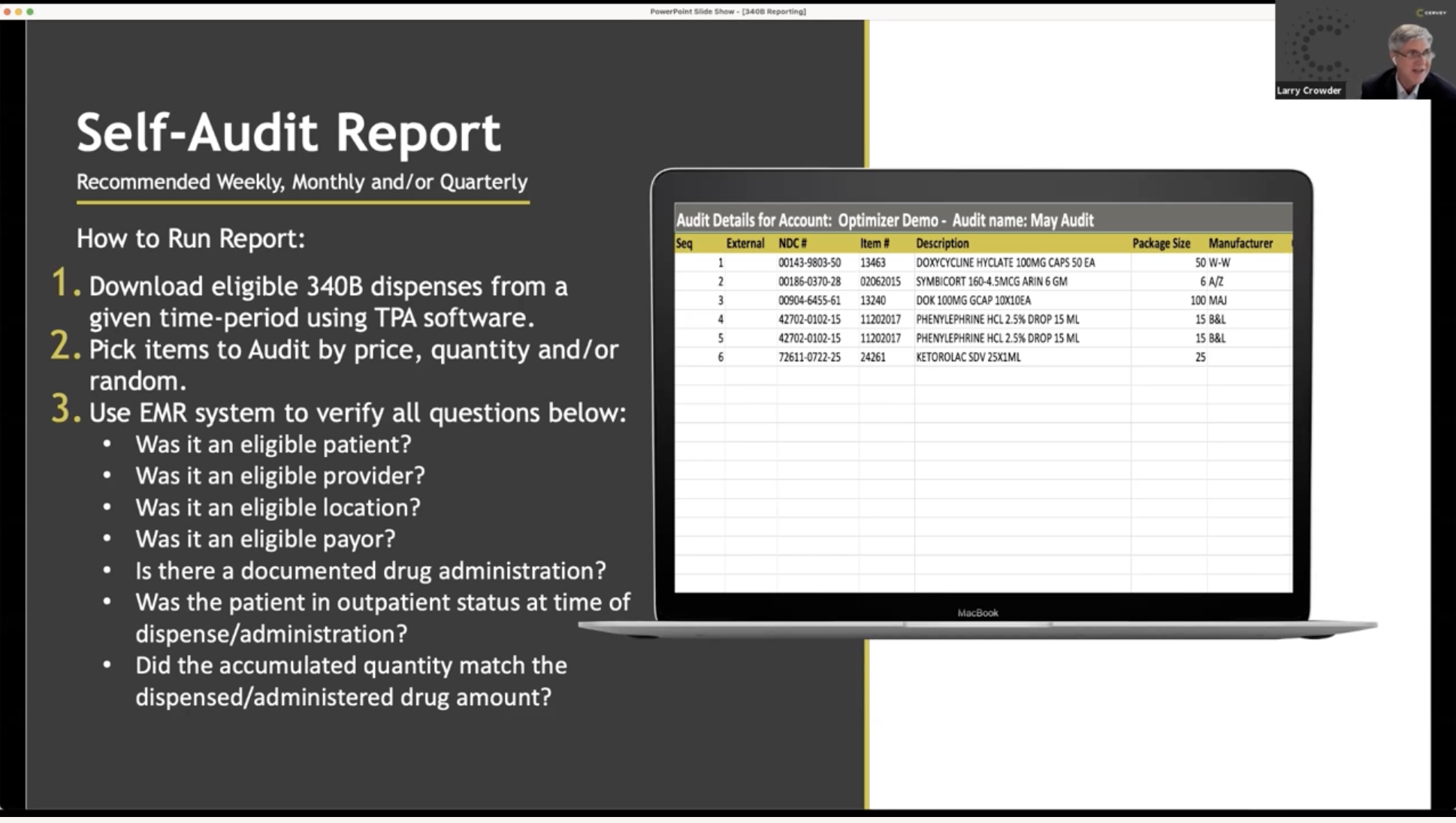 How to Run the 340B Program Audit Report

So that's what the purpose of this report was. And if you look down here at the bottom, it lists out the questions.

Did the accumulated quantity match the dispensed administered drug amount? This is a huge one. Because HRSA will go to your software, they'll make sure that your dispenses are matching, and they'll even look at your previous dispense when you ordered it and then the deduction from the orders. So they're looking at all those things for each claim they choose. And Ambre has a unique way of remembering everything, and they're way on top of this process. But Ambre, tell them the kind of your acronym that you use.

We are excited to share this with everyone. So we made an acronym or a label because we wanted to help the organization understand 340B in its entirety and the roles that every department plays.

So we call that the five Ps of 340B. And that's something that my manager made up. So we use that in all of our P&Ps, and our job aids.

We thought that it was neat that she said the five Ps. You can look at all those. And I'll even say, was it an eligible location? HRSA will go back and make sure that location... They want to know what 340B that area falls under. So they're going to look back at that location and make sure that it's on the cost report in the right place and registered on HRSA.

And how does that registration match what's on the cost report? So there's a lot that goes into an HRSA audit. So you don't want just to be caught with yes, it's outpatient. So it's eligible. You want to look at all these other questions as well.

And as part of this, Ambre, we had a discussion before, and I think it's a good time to bring it up, but you've been part of a peer group.

And so if anyone's watching this right now and you're like, "Man, I haven't done any of these five reports, and we've just been chasing issues when they occur. And some of them have been the big issues, and I wish we would've caught them earlier. So I don't even know where to begin to start." Well, that's partly what this is about. These five reports, we think, are a good starting place, but a more significant thing that I think has been helpful for that group is your peer group. Can you kind of talk about your peer group and what you do. How often did you meet, and how did it come about.

Yeah, sure. We meet every month at different children's hospitals, and we discuss 340B legislation issues or things that we are finding within our systems. Like, "Hey, we lost the... OPAIS says the 340B pricing went up by 50 grand or something." So just things like that just kind of letting each other know, giving heads up and maybe even asking each other, "Hey, how do you guys deal with barium or anesthesia gases or what's your bundling process?"

And just discussing those different aspects of what each entity might do. Because they might be able to help another person, we also do a lot of like, "Hey guys, just a heads up, the NDC for this product has changed." I mean, another company change their NDC. So just making sure that we're all on the ball cause we don't want to get those manufacturer letters. So, but yeah, just things like that.

So that's a group where they could talk to each other, and they understand that they can ask questions of each other. So we would encourage anyone out there if you feel like you're managing your 340B program and alone, so if you feel alone, there's been a lot of responsibility put on me. Nobody in the hospital understands the 340B world, and need some help.

One of the places you could start is with your peers, reach out to similar hospitals, create a peer group, and ask each other questions. And you can really get a lot of good information from peers and how they do processes and how they do it efficiently versus others. And we think Ambre's benefited from that in this group. And it benefits everyone in the group; they get to hear different ideas and ways to do things. So we would encourage you to reach out and start your peer group. And these can be easier for you as you learn them.

Can other children's hospitals join this peer group? Yes. My email is going to be at the end of the presentation. So if that's something that you guys are interested in, please feel free. Or you can start your own or whatever you like. So yeah. Feel free to reach out to me.

340B for Covered Entities and Manufacturers Webinar Poll

So are you currently answering all of the below when performing a self-audit? Yes or no. And so it's going through each of the questions. So we're going to have a moment here where folks get a chance to answer these questions.

1. Are you currently answering all of the below when performing a self-audit?


2. Was it an eligible provider?

3. Was it an eligible location?

4. Was it an eligible payor?

5. Is there a documented drug administration?

6. Was the patient in outpatient status at the time of dispense/administration?

7. Did the accumulated quantity match the dispensed/administered drug amount?

And again, this is something; if you do these things, answer all these questions, and do your self-audits, you will not be nervous when HRSA gives you a call. You won't be worried because you're going to have an audit. If you do this in conjunction with the other four reports, you know that you've seen any anomalies and issues with your data, and you fix that. And then you know that every time you run one of the audits, you're finding that you're compliant in all areas. So then it would be just a fluke if HRSA were to find one thing that you've missed after doing all that.

Results from the Webinar Participants

All right. So we get the reports pretty quick.

1. Are you currently answering all of the below when performing a self-audit?

2. Was it an eligible provider?

3. Was it an eligible location?

4. Was it an eligible payor?

5. Is there a documented drug administration?

6. Was the patient in outpatient status at the time of dispense/administration?

7. Did the accumulated quantity match the dispensed/administered drug amount?

So it sounds like almost everyone is doing everything. The one that was the lowest was done. The accumulated quantity matched the dispensed administered drug amount. And that's a good one to start adding if you're not doing that. So that brings it full circle and makes sure that you're accounting for the billing unit and everything is deducting and accumulating properly based on the billing unit. So that's a good report. That was very good for everyone.

Follow us to stay tuned for Part 7 of the 340B Webinar Series - 5 Reports to Ensure 340B Compliance and Maximize Savings here:

Looking for the rest of the webinar series? Check out parts 1-4 below: