In Part 3 of the 340B Webinar Series - 5 Reports to Ensure 340B Compliance and Maximize Savings Larry Crowder, VP of Cervey and Ambre Ayoub, 340B pharmacy compliance analyst with Seattle Children's Hospital are going to cover the third of five 340B reports, the Missed 340B Savings Report (CAH/RRC/SHC). These five reports are to ensure compliance, maximize savings in the 340B program.

Missed parts 1 or 2? You can find more info below: 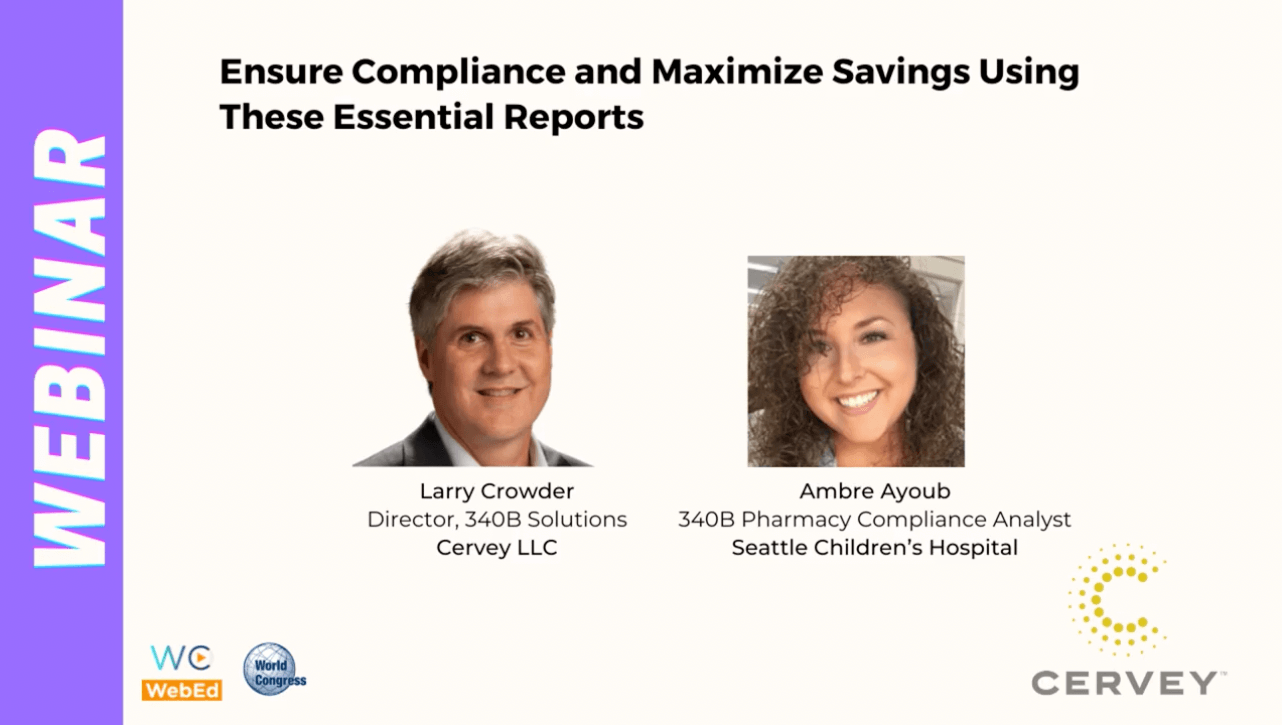 340B Webinar Series - 5 Reports to Ensure 340B Compliance and Maximize Savings: Part 3

We're going to go through these five reports that were mentioned in parts 1 and 2 that are the most helpful or benefit you the most in being efficient with your program. Then Ambre is to go over how Seattle Children's Hospital implements these reports. 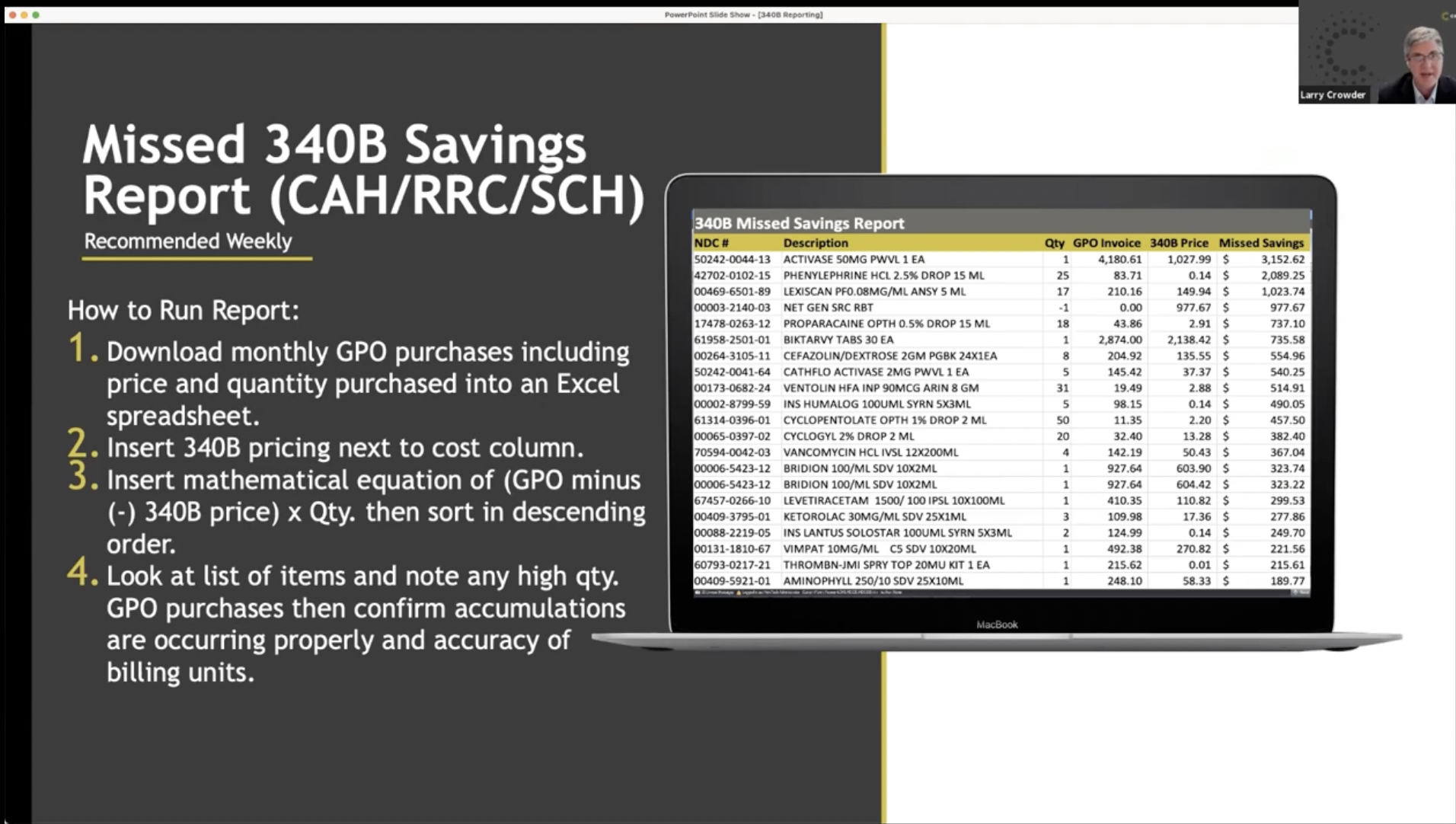 Okay, we'll go to the next report, the Missed 340B Savings Report (CAH/RRC/SHC). So if you are a critical access, or a community rural referral center, that does not have GPO prohibition, you would run this report the same way. The GPO invoice would be your default account and you would compare it to 340B price.

There might be a lot of items on the report that you only use only in the inpatient area. But, if you have the right person reviewing this report, they're going to know if you see 31 purchases and know that, "Hey, that's about what we buy a month in that." Also that it's all going on GPO. That'll be your sign that it needs to be looked at to make sure that you're maximizing your 340B.

You know, and these reports help you maximize your relationship with your buyers as well. It's important for the 340B compliance team to maintain that relationship so that they understand their role with 340B. And so if you find that something is being purchased so much on WAC or whatnot, maybe you have an opportunity to find an NDC that might be either cheaper or more available for your entity in making sure that relationship is good.

And that's a great point again, Ambre. We're all working as a team together. And so your wholesaler and your TPA are certainly part of that team, but also internally talking with your buyers and making sure that they're communicating with you. If they see something that's going continually on GPO or continually on WAC that they know is used in the outpatient area or the inpatient area all the time. So keep that level of communication open.

340B for Covered Entities and Manufacturers Webinar Poll

So we have our first poll question.

So we wanted to ask, which of the following reports has your facility used to track the accuracy and compliance of your 340B data? Answers are a single choice.


And if Ambre could vote, she would be all the above.

Results from the Webinar Participants

Here are the poll results from those who participated in the 340B for Covered Entities and Manufacturers Webinar.

So that's a nice number for all of the above. So for those of you who said none of the above, this might be something that you consider moving forward. Because I think it might help you catch some things that you're not otherwise catching in a timely manner. And one other point to make on these.

Stay On Top of Your 340B Program

As we go through these, we have seen some covered entities where they want so badly for the TPA to have software that they turn on and run in the background, and they don't have to worry about anything. It's important that you stay on top of your program. And this ties closely with the audit webinar we did last time.

Because the bottom line is when HRSA comes in, they don't want to hear, "Well, our TPA didn't have that setting correct in the system, or something happened that we were unaware of." They don't see you doing your self-audits and they don't see you running some of these reports.

So you want to make sure that you stay on top of it because ultimately you're going to be the one responsible when HRSA walks in.

Follow us to stay tuned for Part 3 of the 340B Webinar Series - 5 Reports to Ensure 340B Compliance and Maximize Savings here:

Looking for the rest of the webinar series? Check out parts 1-2 and 4-6 below:

In Part 6 of the 340B Webinar Series - 5 Reports to Ensure 340B Compliance and Maximize Savings ...
Read More