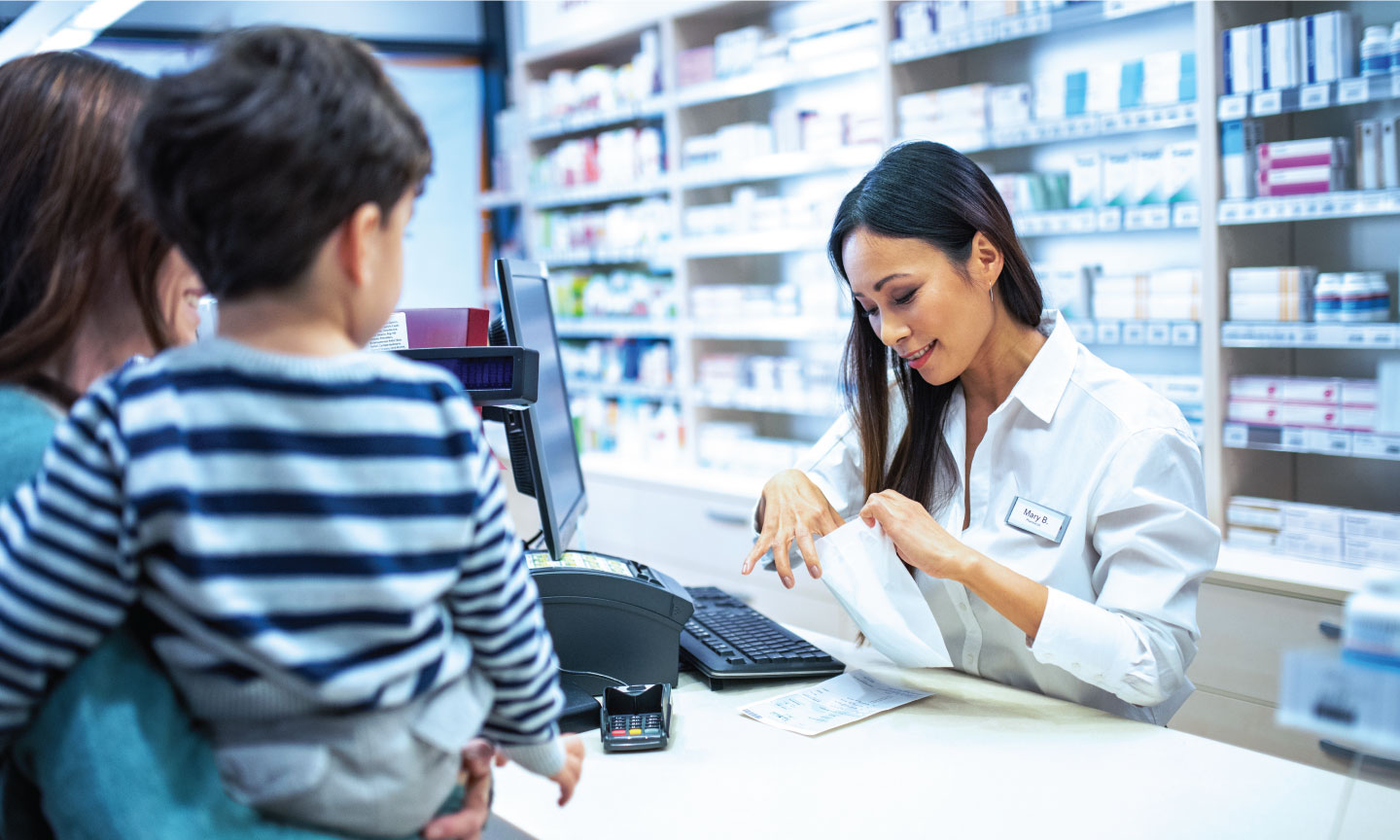 If you’ve received notice from HRSA to begin preparation for a virtual 340B audit, you’re in the right place. Cervey recently hosted a webinar dedicated to understanding and preparing for a virtual HRSA audit. Now part of our Webinar Rewind series where we break down our informative webinars into readable segments for 340B program managers, directors, buying committees, and CFO’s, welcome to part 4 of our webinar: Understand and Prepare for a Virtual HRSA Audit.

Missed the earlier Webinar Rewinds for “Understand and Prepare for a Virtual HRSA Audit?” Catch them here: 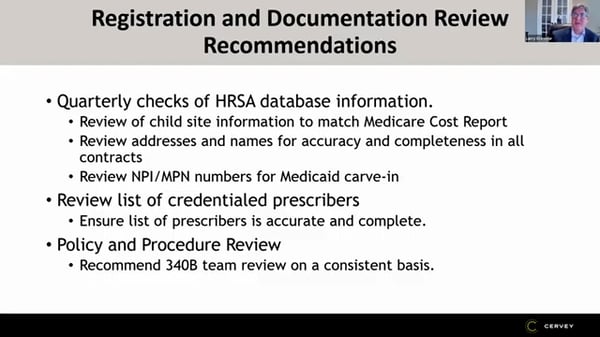 One thing I would say, though, if you use a template from the Apexus website, the auditors have seen those templates, and they know if you have put no effort into making your policy and procedures, and it's just a template downloaded from the Apexus website. You really want to make it unique to your facility and make sure that you're putting your information into these policies and procedures.

Your 340B Database Health

One of the things they look for is, do you have a process to ensure that 340B database is up-to-date and accurate? What's your process? Who's doing that? Who's in charge of that? They want to know what your definition of a covered 340B drug is or covered outpatient drug. So, if you're considering bundled bill drugs, non-340B, they want to see that in your policy procedures.

Your supplies are considered non-340B, you want to put that in your policy procedures, like these are non-covered 340B drugs, OTC without a prescription is a non-covered drug. They want to know the time and we spoke about this both independent and internal audits. They're going to ask you those questions. And again, there's nothing in the statute per se, but they will give you room for improvement on that if you do not have any auditing. You want to make sure you're doing that plus you're going to feel so much peace of mind when you get that audit letter, if you are performing these tasks before they come.

They're going to want to know your physical or virtual process for ensuring that you're compliant and the 340B drug distribution and billing of it.If you're doing separate inventories, for instance, they're going to want to know your processes for how you keep it separate, how do you make sure that a 340B price drug doesn't get in the wrong area? If you're doing it virtually through some type of software, they're just going to want to know that process of how often does the file upload, where's it coming from in the EMR system, that type of thing and the whole workflow and to how that becomes an order.

They want to get into your mechanism to prevent duplicate discounts. So, for those eligible outpatient Medicaid patients, you're going to want to make sure you have something in place that you've alerted the States and you have the MPI listed on the website and that type of thing.

They did. Actually, it wasn't as detailed, it was just kind of more of what is your material? Do you have a policy on it and what is it? But we didn't go into a lot of discussion. Now, one question she did ask that it did catch me off guard a little bit was related to our clinics. She asked how we managed our 340B inventory at our offsite 340B clinics and how we monitored the usage. And right now we don't have an internal process. Once we buy those medications for those clinics and send them to the clinics, we do not have an inventory process to maintain. So, I don't know how that's going to come back on the survey.

So, you view that as a clean site, essentially, you're saying, this is a clean site, everybody here is going through the clinic. It's a closed pharmacy, so everything should be 340B and they're asking for data around that?

They asked how we monitored the inventory.. And so that's where it's one of those things it's hard to read. I didn't know if we were supposed to, or if it was just a question of asking because we bought all of the medications for them on a very specific account and then they return anything that's expired. We do waste it for them, but we don't monitor daily usage or waste if it's a non-control. So, I'll be interested to see if that comes up on our report.

The hard copy of scripts were in the contract pharmacies. So that's going to be in that three day period that you have before the virtual audit to go get those hard copies of those scripts and just be prepared to get those. So, the recommendations we have for this, I recommend, and again, this is the thing that I feel like 95% of all findings are, it's a wrong address or there's something that's just not registered correctly on the HRSA database. And this is something that's overlooked a lot of times by 340B entities, I think. You want to continually check for accuracy on the HRSA website. We had an account that they built a new clinic and so they actually were just moving a clinic from one side of town to the other side of town and HRSA allowed them to leave that clinic as eligible. So, they didn't lose eligibility for the three months. So, they just moved to this new clinic location and it stayed registered on HRSA.

When they typed in the address on the HRSA database, they used the construction address. So, the day of go live, that address changed from like 1300 to 1301. That address was incorrect in the system that was dinged on them for having an incorrect address. So that's the type of stuff that happens. And you just want to make sure that every address is accurate and that you have somebody reviewing that all the time. I suggest you do it at least quarterly, just do a quarterly review of the HRSA database and make sure all those addresses match. I've seen auditors that actually will use spreadsheets and they bring the data together and they do a comparison and if something's off, that's how they find it.

I would recommend if you have somebody who's pretty savvy with Excel to just get a process together where every quarter they're comparing addresses and making sure everything is matching. Obviously the same thing for the Medicaid, the MPI and the MPN numbers. You want to make sure those are correct, and that you're only showing the number that you're billing with. I would state that. Review those credential prescribers. Maggie's already spoken a little bit to this of how some of those issues popped up on her as he's preparing for the audit. So, you want to make sure that that list is complete. And remember what I said, they take that six months of data and they call out every unique prescriber that's in that data, and they're going to compare it to your credentialing list.

You want to make sure that all those prescribers are on that list, that you're providing them. And then that policy and procedure review. One of the things that I've seen in the audits is people will put specific names of people within their policy and procedures and say, Bob's in charge of this. You want to probably typically use titles instead of names. So, if somebody leaves or if their position changes, you're not having to worry about updating that so often, but you do want to have at least titles of folks that are responsible for reviewing the HRSA database, are responsible for their credentialing and physicians and that type of thing. And then somebody that reviews that that's kind of the keeper of the policy and procedures to make sure that they're accurate and they stay up-to-date.

And that's one of those things when you have your 340B team meetings that you can just make sure there's no major changes or any changes that need to be made to the policy and procedures when you're having those discussions.

Follow us to stay tuned for part 5 of the Webinar Rewind series for “Understand and Prepare for the Virtual HRSA Audit Experience” here:

Contact us for a demo of our 340B suite of web-based products that help 340B-eligible healthcare providers with three of their most pressing 340B needs: maximizing savings, ensuring compliance, and optimizing the performance of their contract pharmacies.

Looking for the rest of the webinar series? Check out parts 1-3 and 5-6 below:

The key to any audit is being prepared. With HRSA now doing virtual 340B audits, preparation will...
Read More

With the COVID-19 pandemic still maintaining its hold on the United States, the virtual HRSA 340B...
Read More

This is part 6 of our latest Webinar Rewind, “Understand & Prepare for the Virtual HRSA Audit...
Read More