This is part 3 of our Webinar Rewind series for “Don't Get WAC'd: Minimizing WAC Exposure for DSH and PED hospitals.” Experts Larry Crowder, Cervey’s Senior Director of 340B Solutions, and Stephanie Dyer, 340B Program Analyst at Children's Healthcare of Atlanta, continue their discussion about wholesale acquisition risk in 340B hospitals subject to GPO prohibition, covering financial implications, strategies, and insider insights surrounding WAC exposure.

The Kalderos 340B Rebate Model Overview

"All right, so something I wanted to mention on this webinar is the Kalderos 340B rebate model. So some of you may have been listening to all the news. I know 340B Report does a really good job of updating folks on these different manufacturer models that are being proposed. And the Kalderos 340B rebate model has a direct impact on your WAC spend, so I wanted to mention it here. I wanted to give a high level overview of what that model is, just so that you're aware of it. We do believe that Kalderos is looking at implementing this model sometime this year and I'm not sure which manufacturers are going to be implementing this. But for the manufacturers that decide to use this model it's only affecting those manufacturers' NDCs. So this is not a model that's going to go across the board, so don't worry about that, but there might be a few manufacturers that implement this this year."

"The high level overview really is that they take away your 340B rebate up front, or your discount up front, so you will not be paying 340B price for those NDCs. You'll initially pay everything at WAC. That, obviously, is going to raise your WAC spend. Then you're going to be sending in those dispenses, or claims, for them to look at them and make sure that there's no duplicate rebate associated with those. And, by the way, they are going to prioritize the 340B rebate over the others. If this works, theoretically like they want it to, you're going to get the rebate. It's just a matter of you sending it in, and they will then verify that there's no other rebates out there, and they will send you the difference between 340B and WAC back to you through another third-party vendor."

"They're wanting to do this in two week intervals because they're very well aware of your processes and your reimbursements, so they were wanting to have that happen in two weeks. But for those two weeks, obviously, every two weeks you're going to be spending at WAC versus what you're spending today at 340B, and then receiving those back in rebates. The important part of this is for you to be aware that the WAC purchases are going to increase. The second part is for you to have some type of recording capability, either through your TPA or even on your own, to figure out what you're getting back in those rebates and just ensuring that you're getting the full 340B savings."

"That model, again, is slated to maybe happen this year with a few manufacturers. I don't know which manufacturers they are but that's something that everyone just needs to be aware of that could happen."

"We were wanting to put everything together that we've talked about and really give you an idea of what kind of action that you can take in order to start limiting your WAC purchases. This could be a pretty big impact to your facility, your covered entity, because as you know WAC spend can really be high, depending on what's happening." 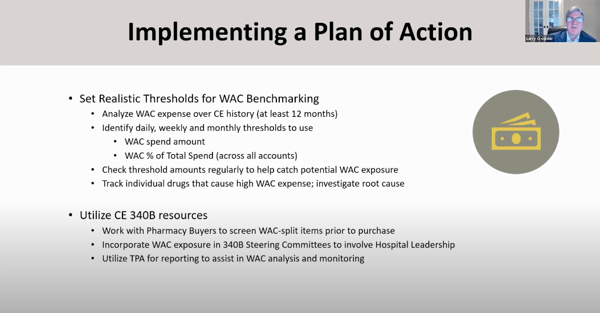 "The first thing you want to do is you want to set those realistic thresholds for WAC benchmarking. That comes with your track and trend. You want to make sure that you know where you are today, so you're going to be looking at your WAC purchases. Another way to look at it, again, is your WAC impact on your 340B savings. That would basically be taking your 340B savings, looking at the net after you take out your WAC losses, and both of those savings reports are based on GPO spend or GPO pricing. Basically your 340B savings is anything you purchased on 340B and compared it to the GPO price. Because if you were not a 340B hospital you'd be buying everything at GPO, so you're comparing all your 340B pricing and dollar amounts to what you would have spent on GPO. You're doing the same thing with WAC, you're comparing what you're paying at WAC and you're comparing that to GPO, and that gives you your losses."

"Take a simple example, "My 340B savings were $100. WAC losses were $20. So overall I saved $80. My net savings was $80." In that scenario you've lost about 20% of your savings due to WAC purchases. That is a percentage that you can use to start track and trending, "How much percentage am I losing in my 340B savings because of WAC purchases?" Again, you may have to spend that much. Those losses may be necessary, but that's why you want to start benchmarking to see. Then you're really going to get a good idea of where you actually are once you start addressing all these issues."

All Hands on Deck. Attack as a Team.

"The final thought that I had on this was utilizing your resources. You want to make sure that this is a hospital-wide commitment, it's not put on one single person all the time. The 340B manager sometimes bears the weight of these things and you want to make sure that you're having committee meetings, or you're bringing everyone together, and you're really, as a team, attacking this issue. For instance, if you're having a committee meeting and, by the way, this is always something that we recommend, always have your leadership committee meeting where you're bringing in someone from purchasing, someone from pharmacy, someone from IT, someone from finance, and you're all getting together and you're talking about 340B or any kind of issues, or new things that are happening in the 340B world."

"This is where you could really pass down, for instance to the nurses, whatever they enter into the EMR system is important to help save some of these issues. If they're entering something in MLs and it should have whatever entry mistakes that could be made, those could have a direct impact on the items that you're accumulating or purchasing. So as a hospital you want to be putting these things together."

Work With the Pharmacy Buyers

"Stephanie mentioned that she works with the buyers, they communicate back and forth together, and then utilize your TPA. You want to make sure that you're utilizing your third-party administrator for those reports, so that you're analyzing and monitoring those WAC purchases in a realtime way, whether it's daily or weekly. I would say at the minimum you want to do weekly, just to make sure that you don't miss anything that gets through that really should not have been purchased on WAC. So at the very minimum you can go back and try to get a credit re-bill, if you catch it in time."

"Stephanie, do you have a committee meeting? Do you meet together on an interval basis?"

"Yes, we meet about quarterly but throughout that quarter I'll work with the buyers, as well as some of the clinical managers. If we see something that we're starting to buy at WAC a lot they'll have me run some data to see, "Okay, how much have we actually been utilizing in the hospital and how much is the pharmacy actually wanting on their shelf because they just want it?" And so the data never lies. And we always just come back and say, "Hey, we used 44 and you guys are requesting 54, is there a reason why you need these extra ones?" It's not just working quarterly going over things, but just on a weekly basis if we see something hitting the report, that savings report every week, then we'll definitely drill down to see if there's an area that's not maybe . . .  If they're doing manual charges they might not be charging for the correct NDC, so we may just need to work with them to update their charge sheets or just knowing who your staff employees are and what they are used to wanting, instead of what they actually need."

"So just incorporating the managers and buyers weekly, in these reports, and sending them out to our director and everything, everybody's kind of involved. And they can also look at, "Hey, we lost this much at WAC," and then they can be like, "Well why are we doing that? Who's asking for this?" It's really good when everybody knows what the 340B program is, and what WAC is, to meet your goals."

"That's part of being the committee meetings and having the leadership really pass that down to everyone else. So, "This is why we are asking for this." I've done several calls before with accounts that explain the 340B program to people even outside of pharmacy and you can just see their expressions change, like, "Okay, so that's why they're asking me to do that." Because it is a headache to do some of these process changes but it really does help the hospital with the bottom line and it makes a big impact, and a difference, on that."

Follow us to stay tuned for part 3 of the Webinar Rewind series for “Don't Get WAC'd: Minimizing WAC Exposure for DSH and PED hospitals” here:

Looking for the rest of the webinar series? Check out parts 1-2 and 4 below:

It’s no secret that a 340B Program is a multifaceted solution to a very serious problem: access to...
Read More

This is part 4 of our latest Webinar Rewind, “Don't Get WAC'd: Minimizing WAC Exposure for DSH and...
Read More